I recently received a “Notice of account closure” from Citi. Apparently, my Citi® Bronze® / AAdvantage® MasterCard® account had been closed due to my lack of activity. I totally laughed because I completely forgot that I even had that card. (And once upon a time I could’ve sworn that card started out as a Visa, but whatever…) It got me thinking about credit cards, and especially those cards tied to loyalty programs, and the various incentives that keep card holders interested and happy.

I got that card many years ago when I started to travel a lot domestically. And I used it pretty well until the Virgin America Elevate card launched, and I was frequenting VA’s LAX>SFO and LAX>IAD routes. But that relationship was also short-lived, and that card eventually folded and turned into a completely non-VA product altogether. Somewhere along the way, I eventually came to really embrace the Platinum Delta SkyMiles card from American Express. Despite the annual fee, this card has been my “friend” for quite some time now, and I have since incorporated it into my daily life choosing to use it vs. my bank’s ATM card. As a SkyMiles loyalist, it really has served me well. I’ve pocketed several miles and used them for various reward tickets, as well as for merchandise from the airline’s redemption mall.

My close friends and I often laugh about the cards we use when we’re all out for drinks or at dinner, as we throw down a slew of cards with travel perks. They range from multi-use point earners, to hotel point earners to mileage earners –whatever floats your boat at the end of the day.  So what is the best card out there? And what about it makes it a winner in your eyes? 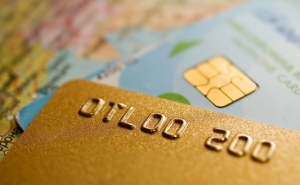 Brian Kelly, better known to seasoned travelers and loyalty program whores as “The Points Guy,” often lists his take on the best travel cards in the market today. His analysis gives you a look at everything from hotel cards to airline cards, and products in-between. In a world where experienced program “gamers” do their best to work the system, or systems, it is not unheard of to choose one card for the generous sign-up bonus, or for the ability to transfer that card’s points or miles for another program’s currency. The Points Guy is THE man to turn to when it comes to maximizing your travel points.

In his last list, which was released through a blog entry this past April, he listed the Platinum Delta SkyMiles card from AMEX as one the top airline and hotel cards with anniversary bonuses.  The card’s anniversary benefit is an annual companion certificate for one roundtrip ticket (economy) in the 48 contiguous United States. On-going bonuses: 2X miles on Delta purchases, 1X on other purchases, and up to 10K MOMs a year (SkyMiles members, you know what those are)… and other bonuses that SkyMiles elite members also partake in (i.e., Priority boarding, first checked bag free). The annual fee can be a blower at $195 (originally $150, but has risen perhaps on account that AMEX has decided to waive foreign transaction fees for the Delta SkyMiles card products as of late), but given the perks it is worth it in the end – especially if you actually put the card to use. (And it is definitely worth the free companion ticket!) Other cards are listed as well, and The Points Guy gives a great summary on his choices.

Did your card make TPG’s list? Hopefully so. Incidentally, that random Citi AAdvantage card that has been cancelled for me did not make the list –but rightfully so. As a bronze-level card, there wasn’t really much to it anyway, so to that I say, “Bye-bye-bye…” (With the N*Sync wave.)