When it comes to specific fashion trends, I often find myself in an odd place at an odd time. Specifically, I tend to like something so much before it actually becomes “a thing.” Now, I’m not at all trying to be boastful, because I am not in the least in the fore-front of fashion or trends. But I do like to keep up as best I can, and make the latest trends work in my favor.

I remember one summer several years ago… I was shopping around for something to wear to a friend’s wedding. I was hell-bent on a specific color of green, and I wanted to find a shirt or tie in that color. The color was so specific, too; more of a cross between a “mantis” green and a “pistachio.” (Yes, I just wrote “mantis.”) Well, I searched high and low for it… even considered buying fabric for someone to make a tie for me at the last minute, but at the end of the day it just wasn’t that serious. I don’t even remember what I ended up going with for the wedding, but what I do remember is that the exact shade of green popped up EVERYWHERE that following fall and winter. And by that time, I was over it, and on to the next thing.

It happened again. A few seasons ago, I was looking for a specific shade of orange to make my fall gear “pop.” I didn’t want the typical “pumpkin” or “persimmon” shades, but I wanted a bright “vermillion.” Again, couldn’t find it anywhere. But the following spring and summer, I could not get away from it as it was on every store rack from Banana Republic to Macy’s. Again, I was over it.

And just about a year and a half ago, while the world of men’s shoes was so dedicated to the desert boot (I had bought a pair of those two seasons prior to its sudden rise to the media forefront), I had my eyes on a simple, yet well-crafted brogue. So I searched and searched, until I came across a pair that was not overly stuffy, but out-right “British.” (And inexpensive.) I bought the shoe, wore it a couple of times, but then let it sit in my closet as I tried to figure what else to do with them. The rest of the world, mind you, was still embroiled in their love of the desert chukka; meanwhile I was trying (still am, actually) to get rid of mine.

Fast forward to now, and the brogue is at the focal point of men’s foot fashion again. The usual suspects, who’ve always carried them, are still pumpin’ them out: Cole Haan, Original Penguin among them. And now high-street shops the world over have their version of the shoe –for both men and women.

It’s not that the brogue was ever not in style. They’ve always been on the scene, more popularly a “work” shoe than anything else back in the day. As I kid, the thought of brogues always brought to my mind lawyers and business men. And rightly so. Paul Smith, Allen Edmonds and the plethora of upscale shoe makers were known for catering to the business man. But by the late 80s-early 90s, the shoe had become stuffy… old… my “grandfather’s shoe.” In recent years, however, the Brits have to be credited for revitalizing the style, and merging the classic silhouette with a more “smart” look. It’s a look that now has every fashion magazine’s attention. The latest GQ style guide for Sping/Summer lists the brogue as one of the year’s top trends for men in 2014. Go figure.

Needless to say, the timing of this brogue resurgence has been impeccable, although just a little late according to my calendar. But nonetheless, it’s a welcomed trend. It was just a matter of me pulling my now year-old pair out of its box, finally allowing them to see the light of day (again), and firmly sending a former pair of well-worn Chelsea boots on its way to shoe heaven.

Who knows what will come next? But I’m sure there will be a moment where I’ll want something so specific, but won’t be able to find it till it’s mass-marketed by The Gap two seasons later. I’m no Nostradamus of fashion trends, but I know what I like.

Right now, I am liking loving this brogue-mance. 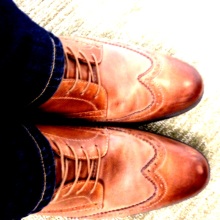